Time goes by so quickly. For 12 years, the Beijing International Film Festival (BJIFF) has infused the world film scene with infinite vitality as it proceeds to forge ahead with full enthusiasm. On August 13, 2022, the 12th BJIFF, guided by the China Film Administration and hosted by China Media Group and the People’s Government of Beijing Municipality, opened at the Beijing Yanqi Lake International Convention & Exhibition Center (BYCC), bringing the joy of reunion for the film’s sake and continuing to help with the prosperous development of Chinese cinema. 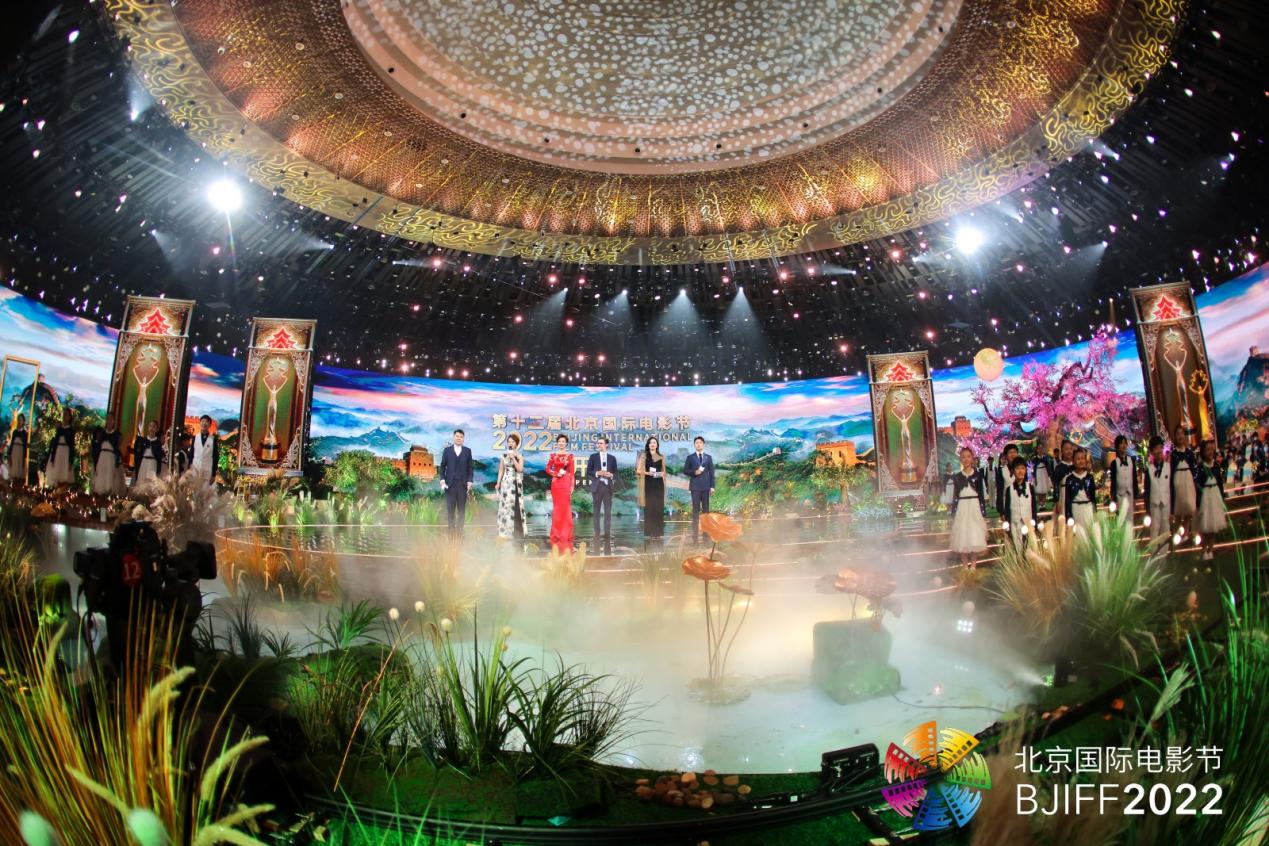 Nearly 200 filmmakers and guests appeared on the star-studded red carpet, and the grand and amazing opening ceremony wove the night by the Yanqi Lake. Representatives of the cast & crew of such films as No Zuo No Die, The Battle at Lake Changjin, Hedgehog, The Fallen Bridge, Moon Man, Kong & Jigme, In Search of Lost Time, Song of Spring，Warriors of Future, Sunshine of My Life, Off the Stage, and China Youth: My Youth & I, as well as Chen Baoguo, Derek Yee, Louis Koo, Ge You, Kara Wai, Raymond Lam, Ma Li, Shen Teng, Wu Jing, Wang Junkai, Xiao Yang, Yong Mei, and other filmmakers, walked the red carpet and showed their charm as filmmakers.

Films reflect reality and witness the changes of life and times. In the latest ten years, China’s literary and artistic creation has continued to prosper. While the Chinese film industry is showing strong momentum, Chinese filmmakers are also writing about a beautiful China with their lenses and eulogizing the great era with the silver screen. The 12th BJIFF continues to shine the light of cinema on the promising future head, and join hands with people to move ahead in the name of cinema.

At the opening ceremony, Mr. Shen Haixiong, Vice Minister of the Publicity Department of the CPC Central Committee, President of China Media Group (CMG), and President of the Organizing Committee of the 12th Beijing International Film Festival, declared the opening of the 12th BJIFF. According to him, Chinese films are vying for the advancement and full of vigor and vitality. Since its inception, the BJIFF has shown its unique charm in contributing to Beijing’s endeavor to build the “four centers” of the capital with its time-tested style and aura and increasingly far-reaching international influence. “This year’s BJIFF is coming as scheduled to unite Chinese and foreign filmmakers, so that ‘United We Advance’ to rise to the challenges. As the cool autumn breeze blows, a harvest season is coming. Global filmmakers are also about to share the glory of the harvest in Beijing and Huairou District!” 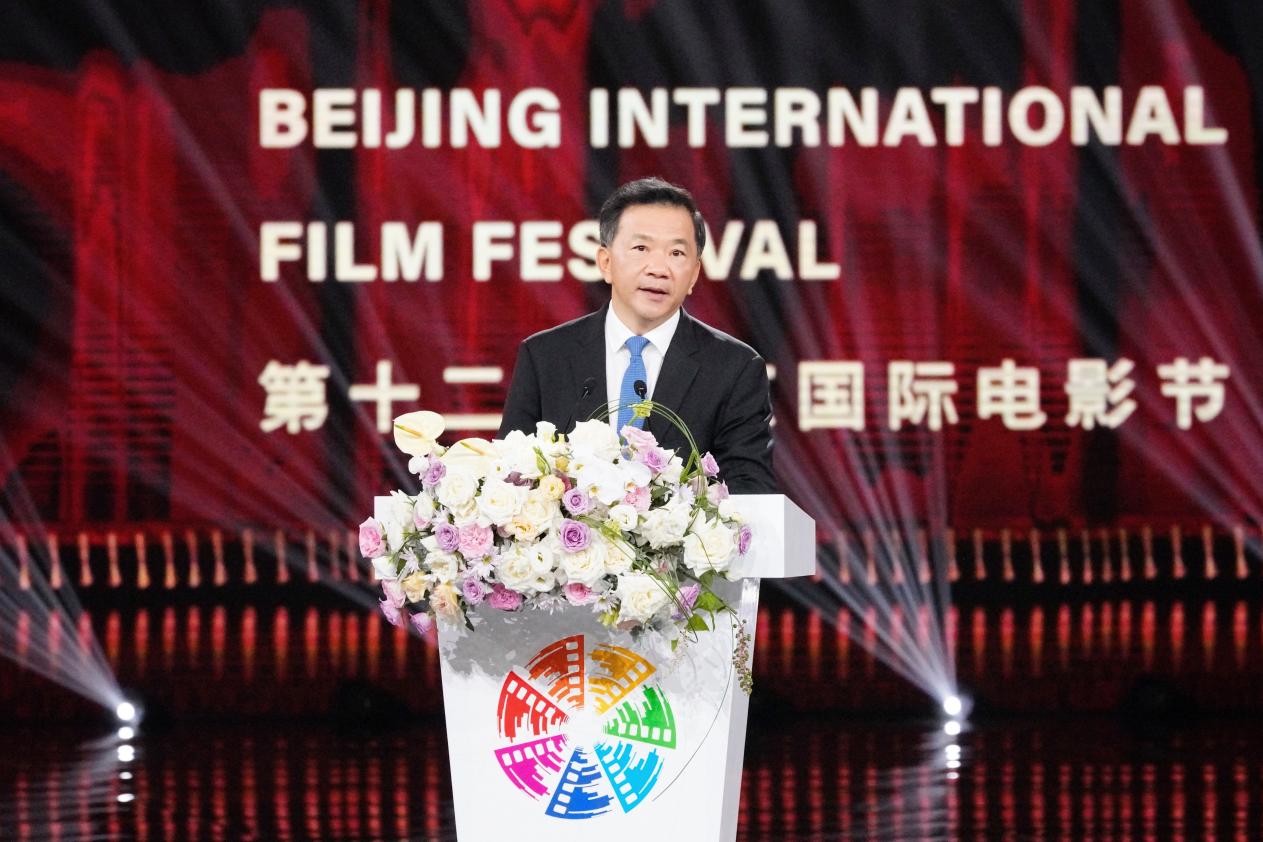 Mr. Mo Gaoyi, member of the Standing Committee and Director of the Publicity Department of the Beijing Municipal Committee of the Communist Party of China and Executive Vice President of the Organization Committee of the 12th BJIFF, said in his speech that the BJIFF has become a representative label in Beijing’s drive to build itself into a national cultural center, and that Beijing is confident and capable to make greater contributions to building China into a film power! “We will take building Beijing into a film and television hub as an important carrier for the building of it into a national cultural center, and unite with the vast number of filmmakers to advance, pushing forward the high-quality development of Chinese cinema.”

The hosts of the opening ceremony were Tian Wei, Li Yangwei, and Sun Yang, along with Sabino Vaca Narvaja, the Argentine ambassador to China, actor Chen Jianbin, and actress Yao Chen as guests. The opening video Love: To Every Dream Chaser allowed the audience to witness the “China Miracle” and feel the “enthusiasm of China” from the interweaving of light and shadows.

Tristan Bauer, Argentine Minister of Culture, was invited to make a speech, saying that “this event at the 12th BJIFF will further ramp up the relationship between the two countries and bring Argentine cinema closer to the Chinese people”. 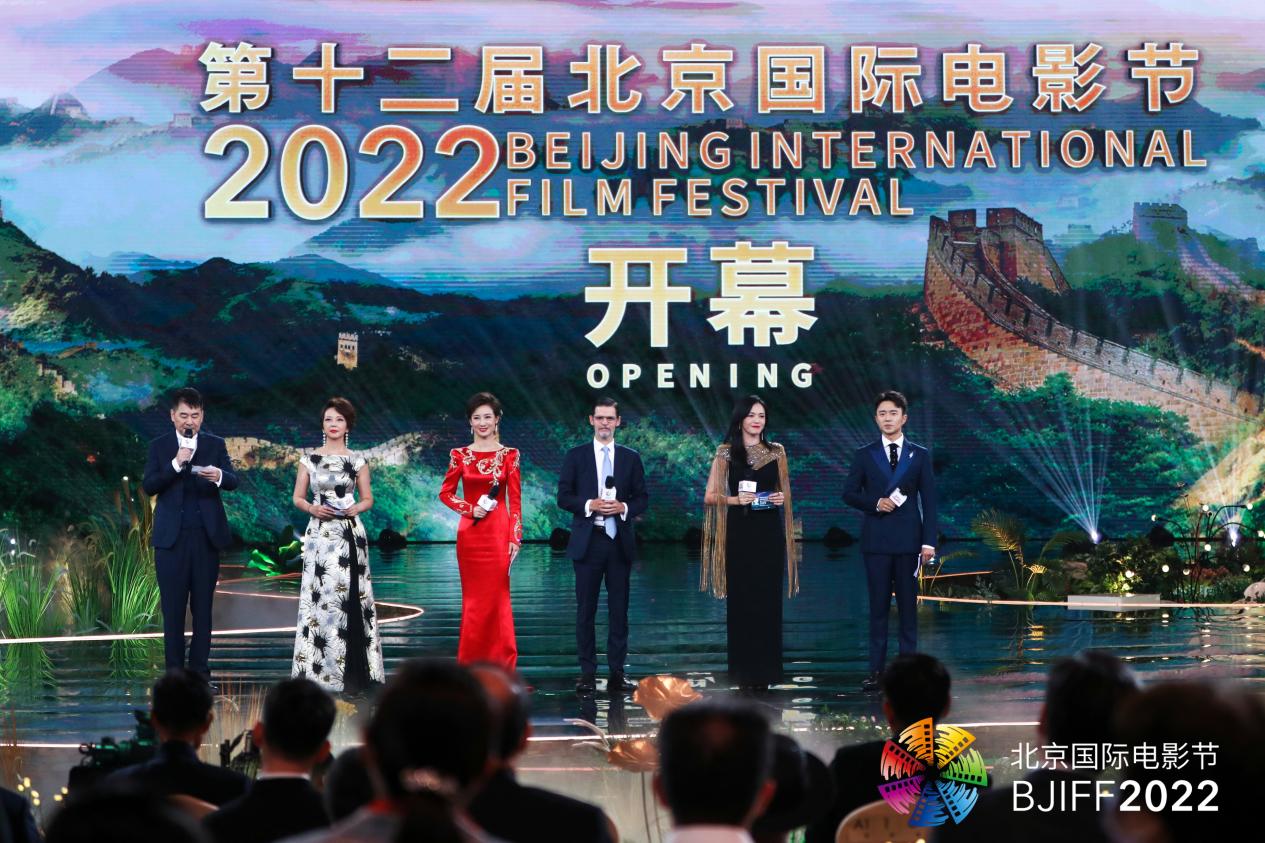 The Tiantan Award highlights international expression and Chinese narrative, ahead of the curve of world cinema

The jury of the Tiantan Award for the 12th BJIFF was also present at the opening ceremony. The jury president Li Xuejian stressed that the BJIFF is part of China’s endeavor to build a community with shared future for mankind, and said that “we will definitely try our best to decide on outstanding works and film creators that are popular among the public and widespread and stand the test of time.” 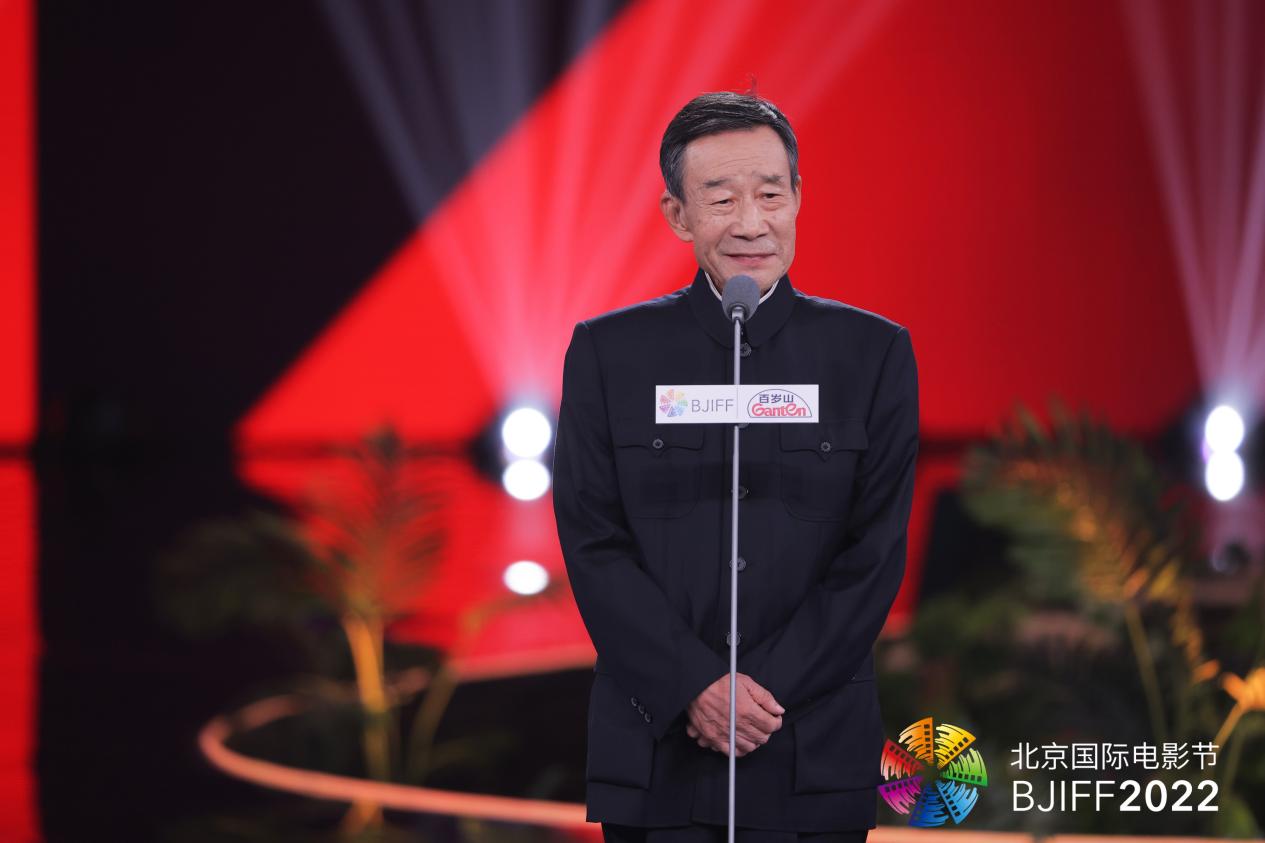 Jury members Frant Gwo, Malcolm Clarke, Qin Hailu, and Wu Jing also came to the opening ceremony, and the other two foreign jury members, Argentine director Lucrecia Martel and Italian director Michelangelo Frammartino, expressed, through a video, their expectations that filmmakers from various countries share a determination to shape the future of the film industry. 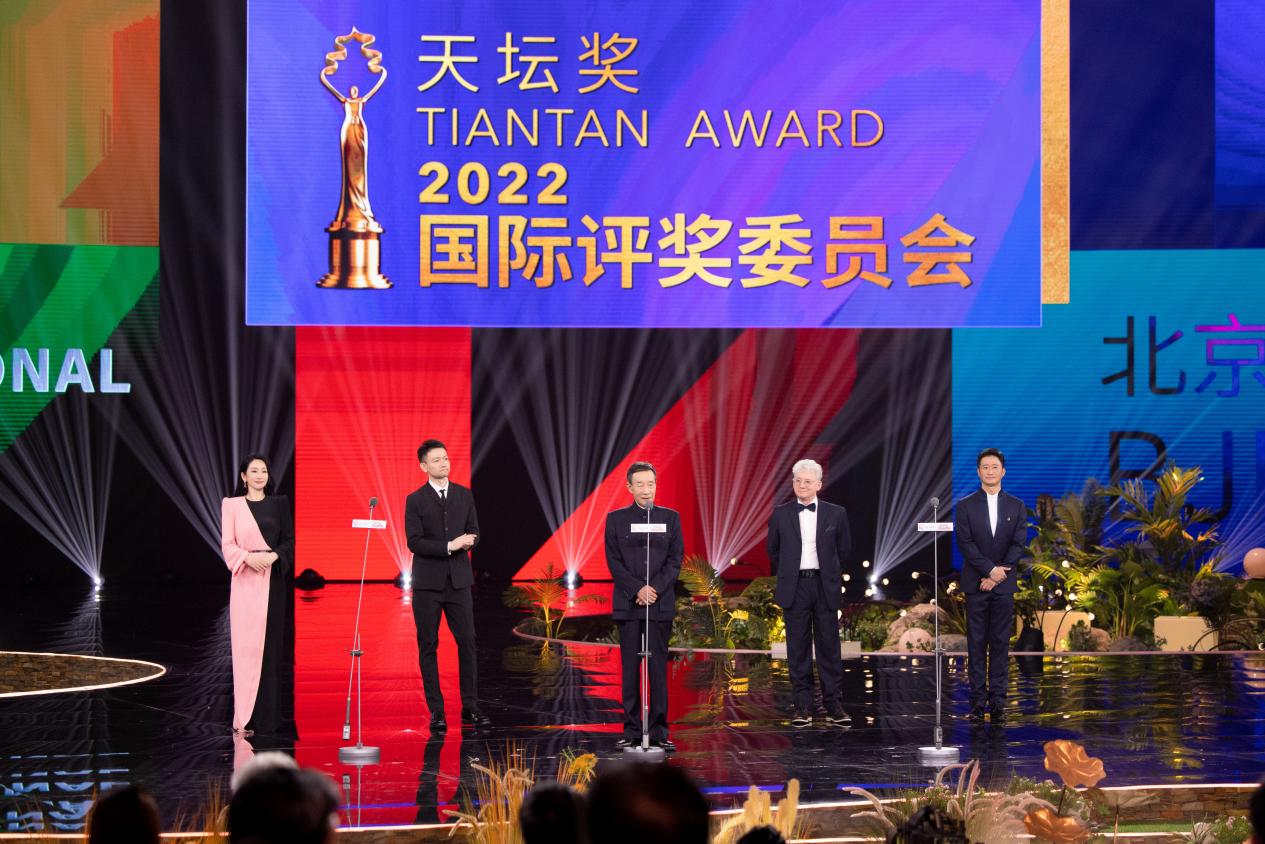 For this year’s Tiantan Award, the shortlisted films were selected from 1,450 entries from all over the world. At the opening ceremony, four groups of guests introduced four shortlisted films each: Xie Fei and Kara Wai on Sardar Udham, Unrest, Utama, and In Search of Lost Time; Shen Teng and Ma Li who also made a surprise appearance as promotion guests on Fast & Feel Love, The Blind Man Who Did Not Want To See Titanic, The Good Boss, and Off the Stage; Wong Cho Lam, Zhang Tian’ai, and Qi Xi on Full Time, The Family, Call Jane, and Song of Spring; and Ge You and Wang Junkai on Kong & Jigme, Anatolian Leopard, Jai Bhim, and The Exam. The fascinating introduction of these guests allowed the audience to see the diverse landscape and rich philosophy of world cinema. 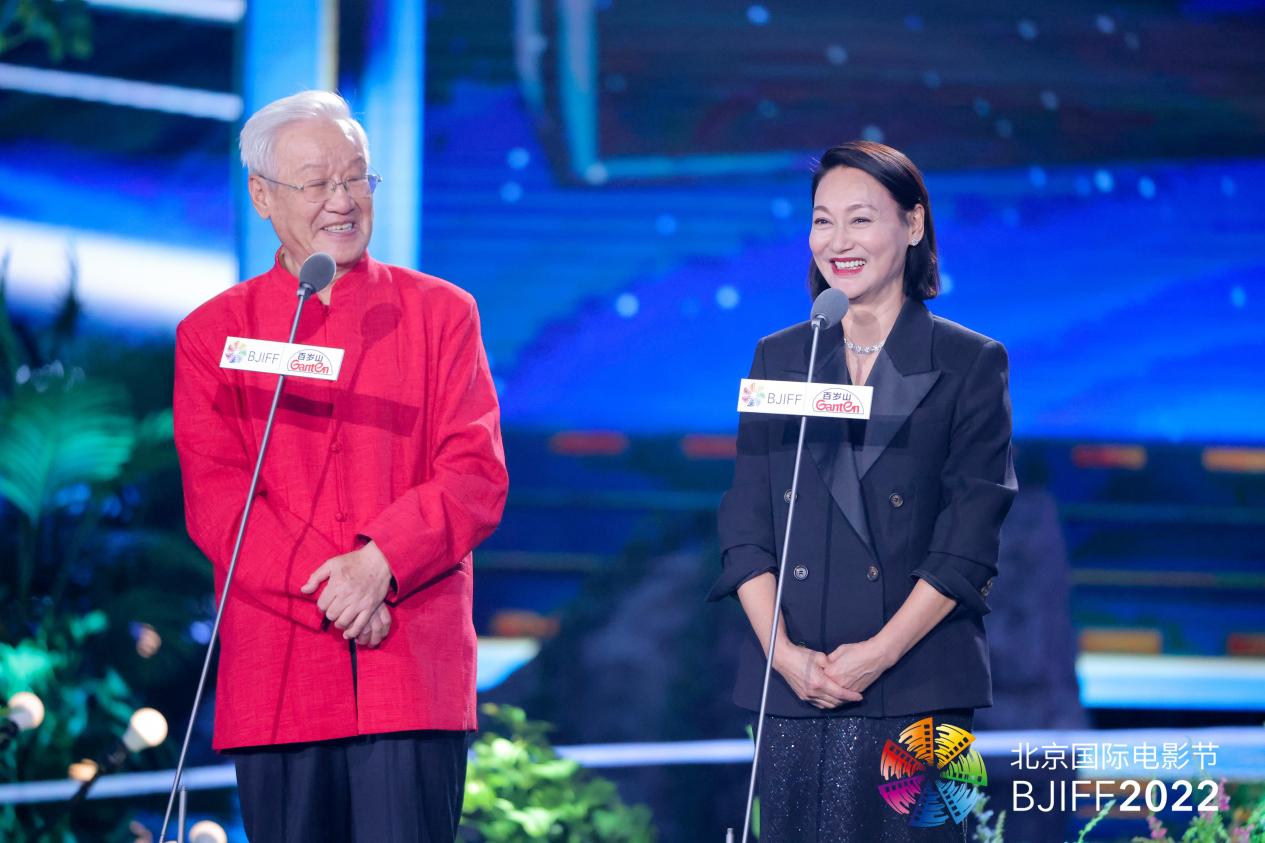 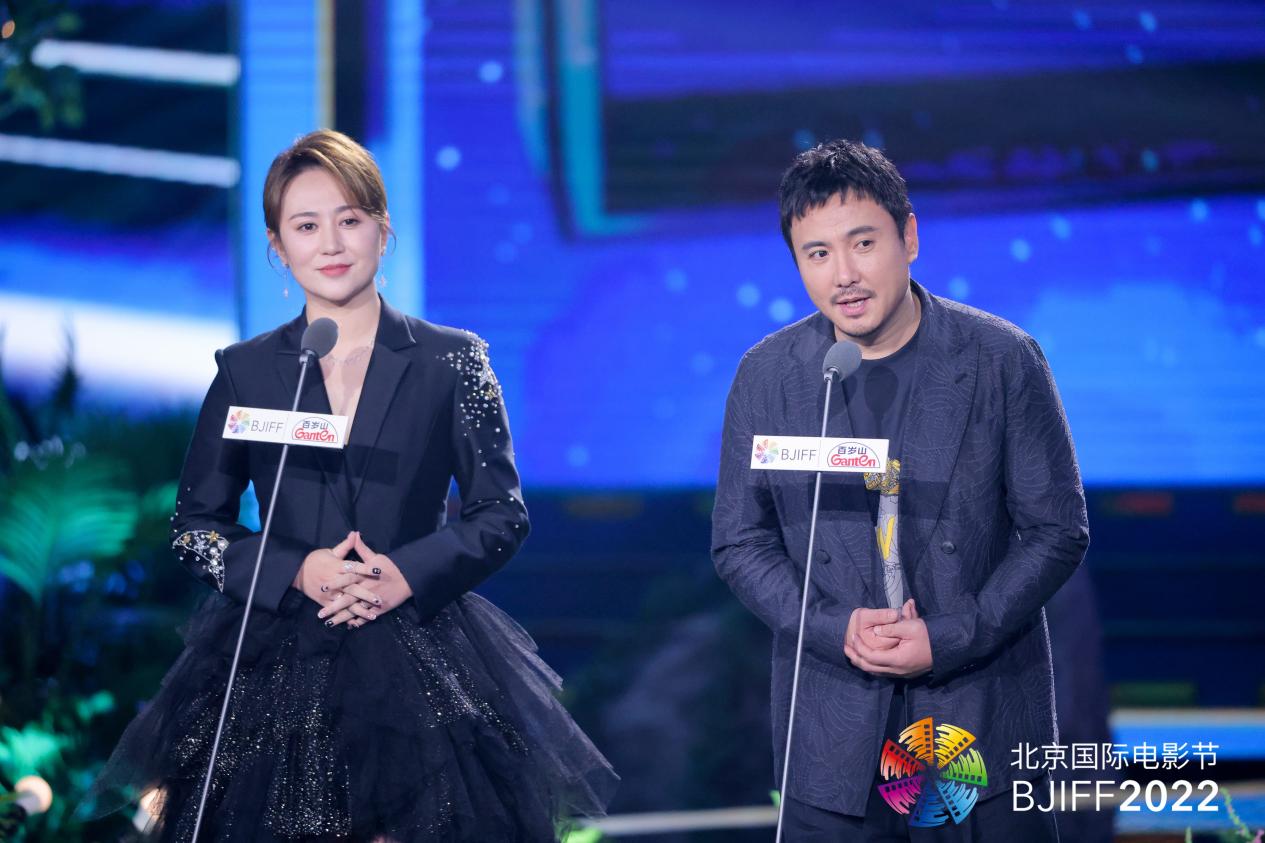 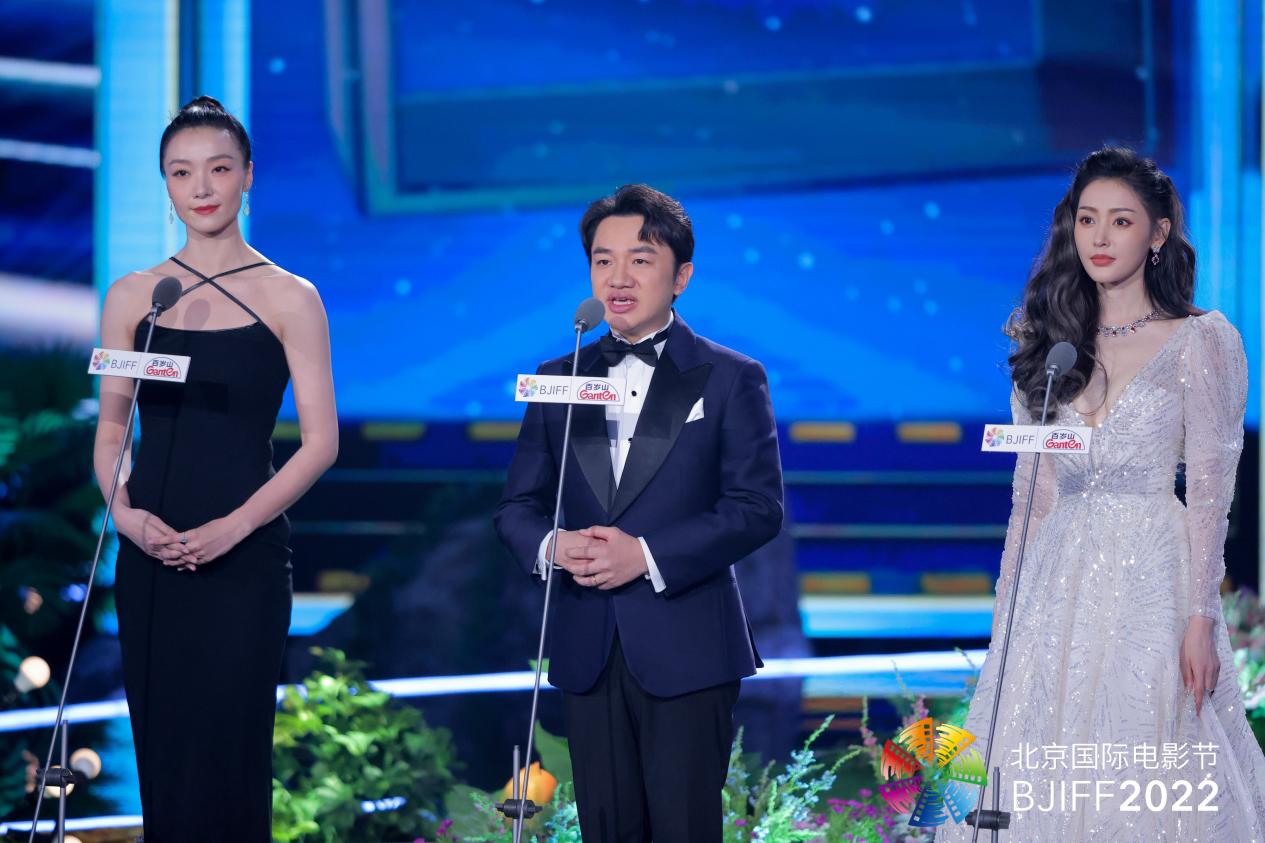 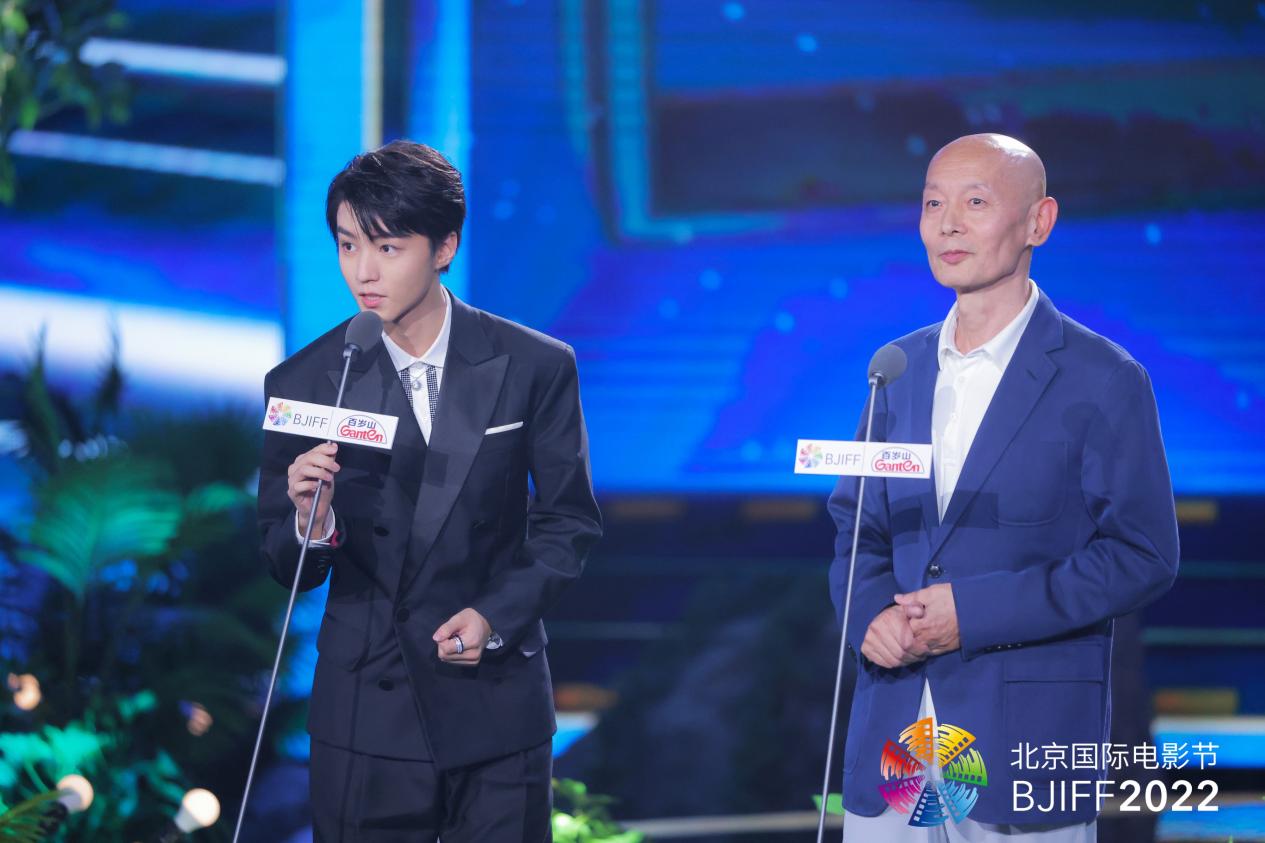 As the opening film of this year’s BJIFF, the director of In Search of Lost Time, Derek Yee, and producer Bai Jie, along with the cast including Chen Baoguo, Ma Su, Ayungg-a, Luo Yichun, Ding Chengxin, and Badema, appeared on stage. Derek Yee invited the audience to watch this work that was made studiously and sincerely, and “to feel the story that took place 60 years ago and would be cherished in history forever for the greater friendship between ethnic groups.” 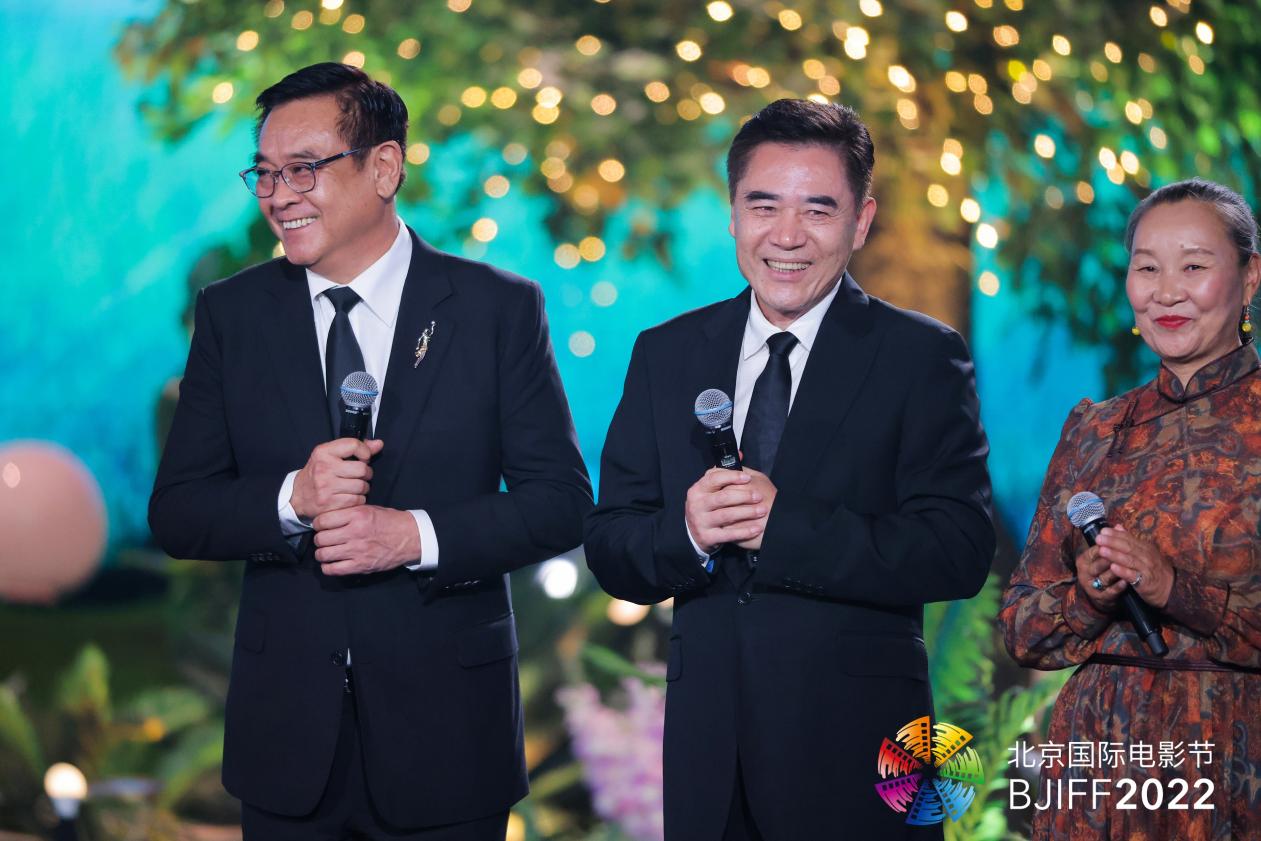 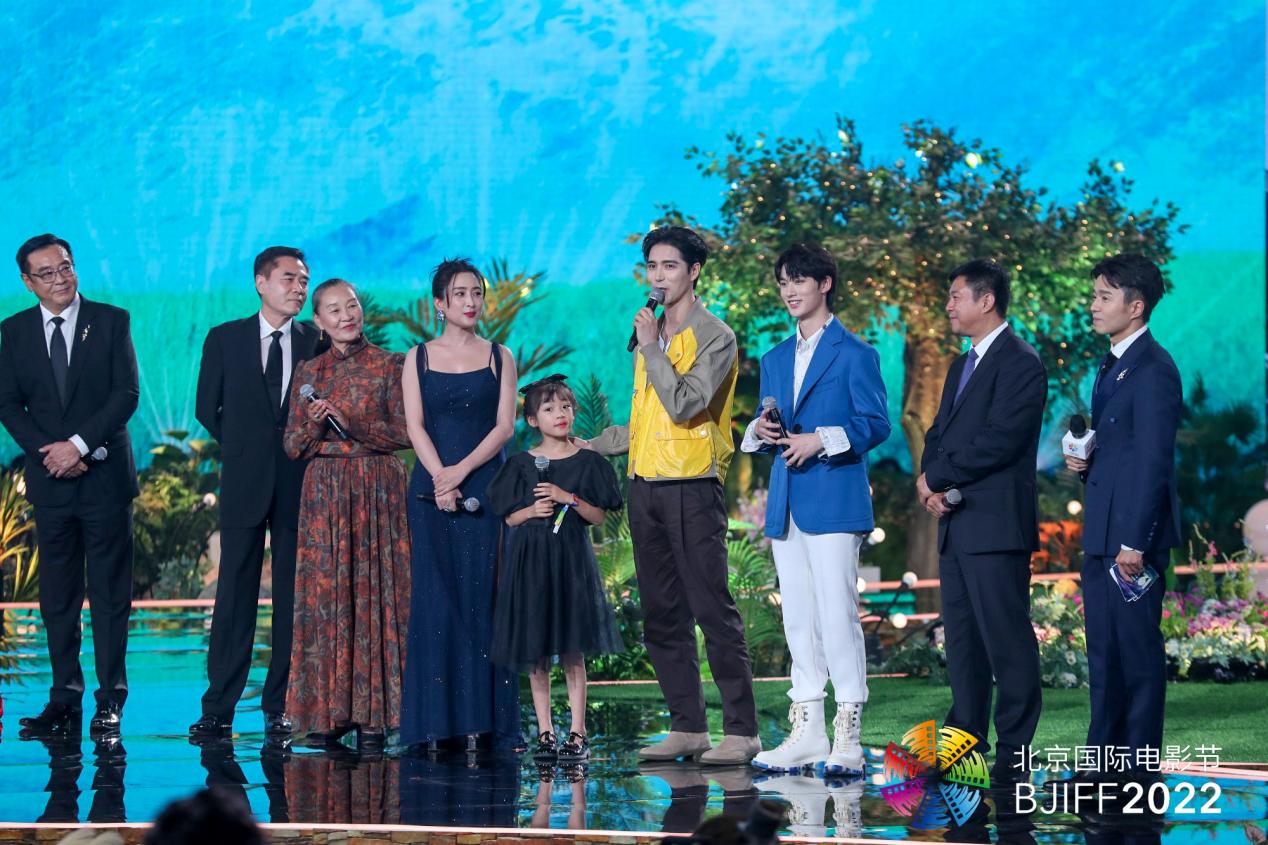 Every time when filmmakers meet, it always means a long-awaited reunion; and every return of each edition of the film festival means to start a brand-new journey. The opening ceremony not only featured moving performances, but also focused on the close connection between the film and the times, making it an artistic link to spiritual communication and embarking on a spiritual journey across time and space.

The show, Huairou, Beijing: An Appointment with the BJIFF, depicted the ethereal and spirituel charm of Huairou as a “film town” with beautiful scenes of the interweaving of the sky, clouds, the bright moon, and numerous lights. The opening show, Every Gathering Is a Long-awaited Reunion, was novel and full of a feeling of seemingly making people immersed in a palace hall, allowing the audience to share the opening ceremony with the filmmakers at “zero”.

Li Yuchun’s Stars in the Galaxy showed the splendor of Beijing as a dual Olympic city, wishing for a peaceful and prosperous world to live up to the expectations of our forefathers. With his song Love is a Single Word, Jeff Chang, a famous singer from Taiwan, China, sang the love of all filmmakers for the film.

Moving Ballads, a medley of movie theme songs performed by Teens in Times, a Chinese boy group, were endlessly evocative and inspired filmmakers to create heirloom works with an artisan spirit. Liu Huan sang Wandering with Earth, the theme song of the film The Wandering Earth, presenting the core emotions of Chinese filmmakers. 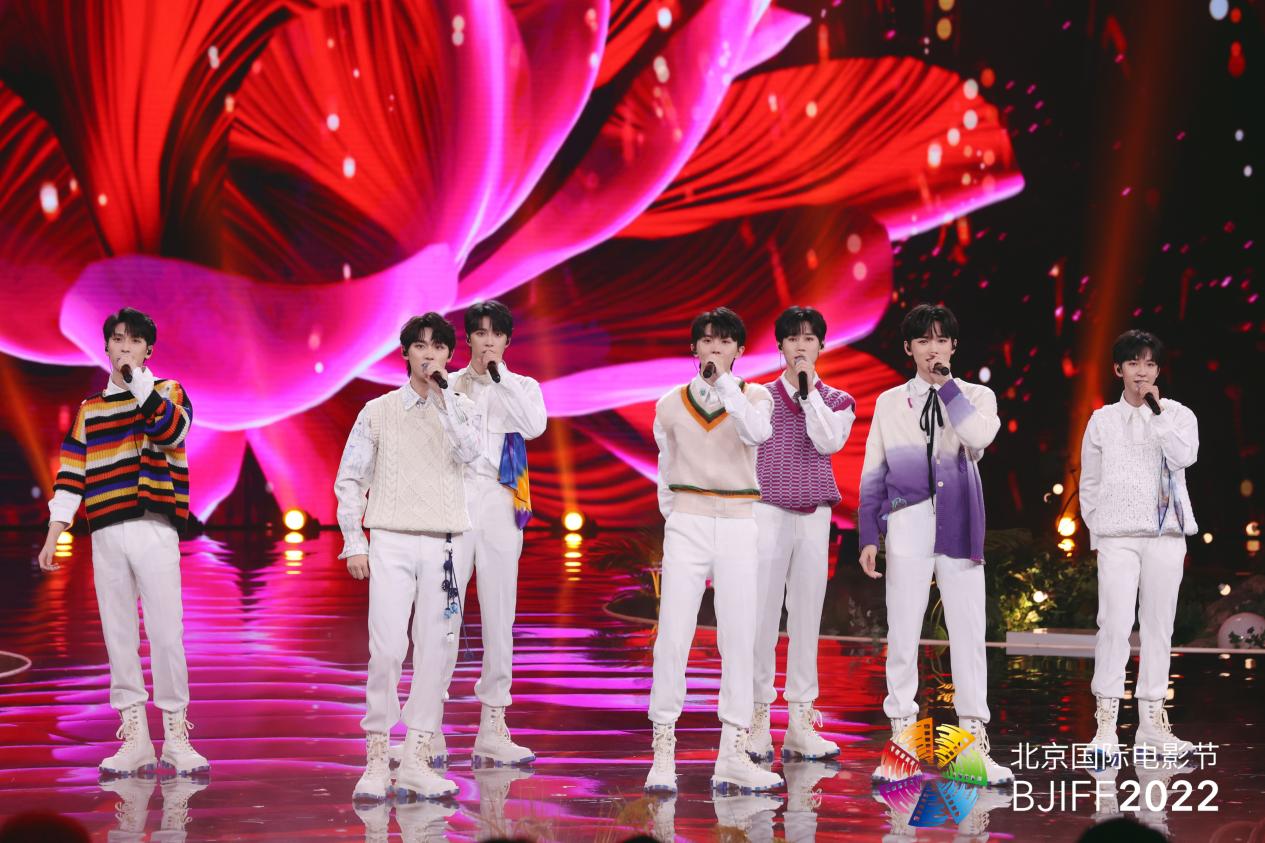 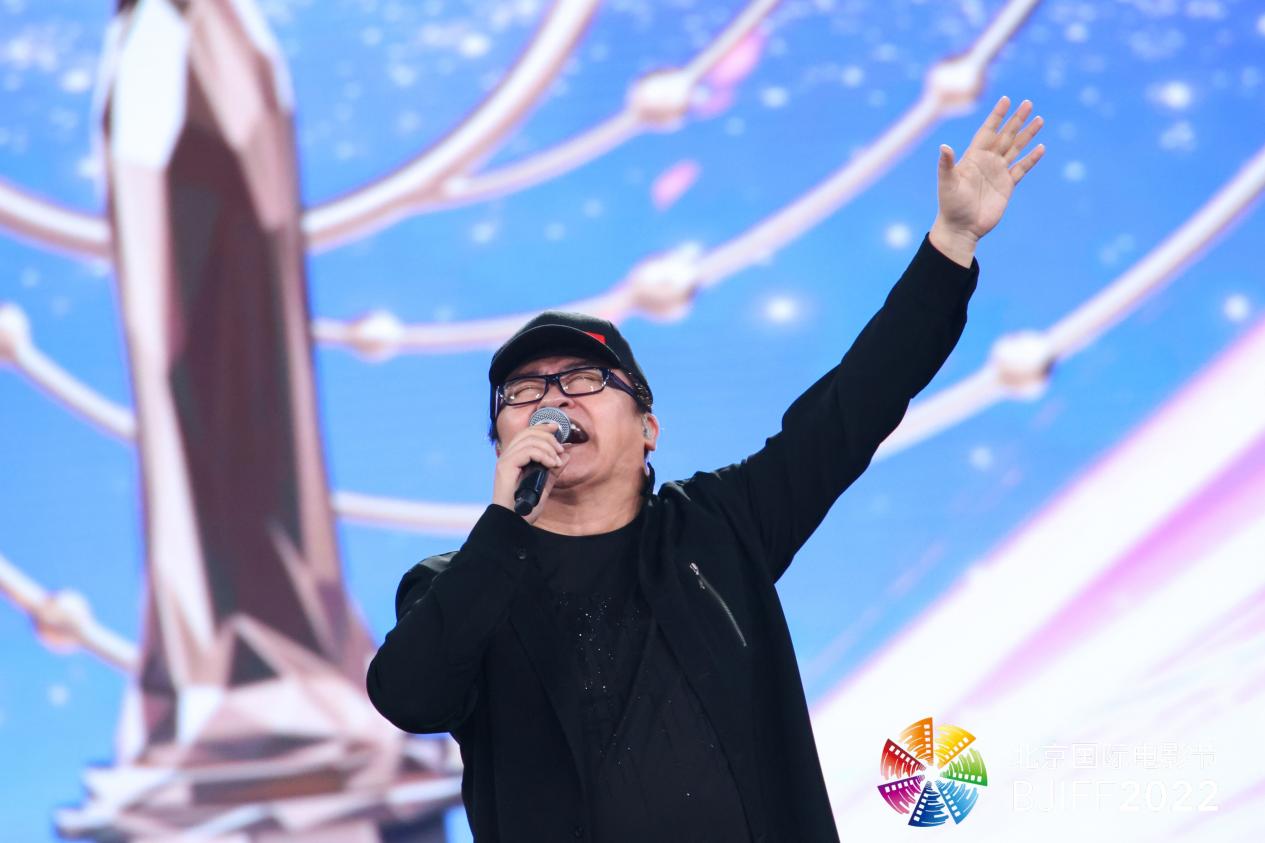 At the “Yi’s Comments: Traditional Culture in the Film” session, the organizing committee invited Yi Gongzi to share her views on the traditional culture in the film, revealing the unique charm with which traditional Chinese culture empowers Chinese films. 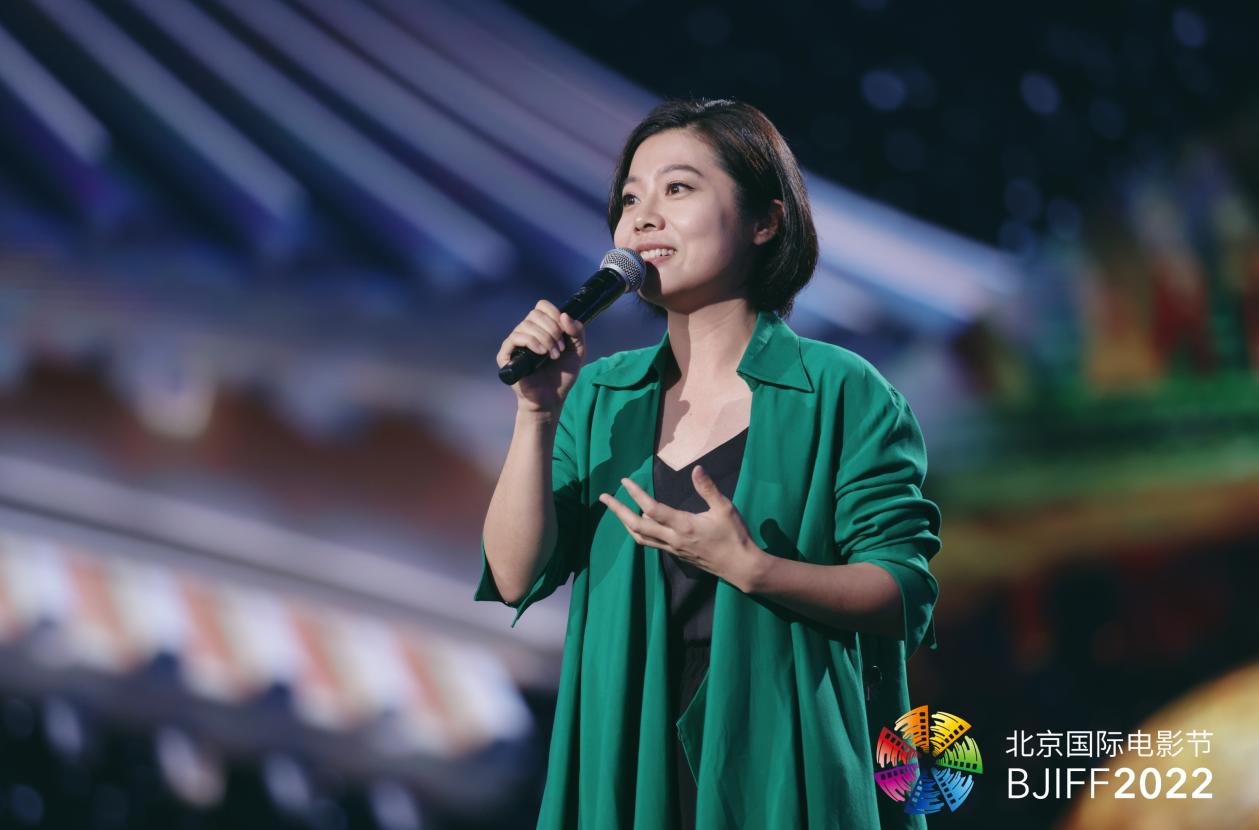 The cast and crew of the film The Battle at Lake Changjin appeared as part of the Special Honor session, including presenter and chief producer Yu Dong, senior producer and screenwriter Huang Jianxin, and the leading actor Wu Jing. Mei Menzao and He Zongguang, both of whom are veterans in the war to resist U.S. aggression and aid Korea, also came to the opening ceremony as guests, and the Beijing 2022 gold medal winners Gao Tingyu and Qi Guangpu presented flowers to them.

The BJIFF showcases the cultural prosperity behind the Chinese film market and the love and passion of Chinese film fans for cinema. The 12th edition is not only a love letter for friends all over the world, but also the answer of Chinese filmmakers with a sonorous voice to the new journey in the new era. The video Walking in the Light recalled how the BJIFF has expressed its deep love for cinema and how it has spent 12 years drawing global attention to Beijing, the city where Chinese cinema was born.

The openness, inclusiveness, primitive simplicity, and pursuit of innovation of Beijing as a dual Olympic city empowers the film culture and market in Beijing with a unique aura and charm. In the most beautiful, energetic autumn season in Beijing, various activities will be in full swing from August 13 to 20, continuing to create new heights of the BJIFF.

The Beijing Film Panorama section, which has made a pact with movie fans, features more than 100 outstanding Chinese and foreign films, and a special session to celebrate the 25th anniversary of Hong Kong’s return to the motherland. In line with the guiding principle of the theme of building a film power, the Theme Forum series activities help with the sound and high-quality development of China’s film industry, and will also hold three Workshops & Masterclasses featuring Li Xuejian, Malcolm Clarke, and Derek Yee. Through Project Pitches, BJIFF TALENTS, and other activities, the Beijing Film Market section looks to tap new talents and film works and stimulate creative vitality, and hold a series of exchange activities within the industry. The “Film+” event is rich in creativity. New to the BJIFF, the Weibo Movie Awards Ceremony, Beijing International Sports Film Week, and Film Night in Beijing, China will make a debut. The “Camping Club”, part of the Film Carnival section, will bring young filmmakers closer to their fans...

United we advance forever; to live up to expectations, we strive to produce great films. While Beijing boasts a profound tradition in film culture, the BJIFF, after twelve years of efforts, has taken a further step forward in terms of expertise, authority and international identity, injecting new momentum and vitality into the development of Chinese and world cinema. The BJIFF will encourage more extensive artistic creations, record more unforgettable history, promote a greater national spirit, provide more support in wider cultural exchanges, and bring passion and emotion beyond the film itself to global audiences.

Disclaimer: This article is reproduced from other media. The purpose of reprinting is to convey more information. It does not mean that this website agrees with its views and is responsible for its authenticity, and does not bear any legal responsibility. All resources on this site are collected on the Internet. The purpose of sharing is for everyone's learning and reference only. If there is copyright or intellectual property infringement, please leave us a message.

Fake rescue as evidence, You can't get away with anything